Home » From The House » New Reality TV Show: Scott Baio is 45 and Single 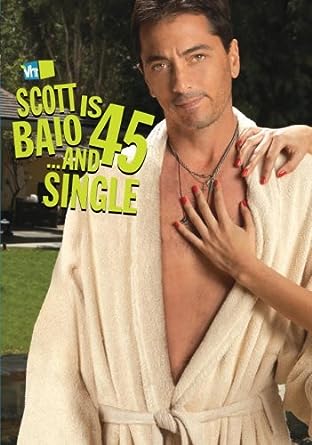 It’s only been on for a few episodes, but VH1’s new reality show Scott Baio is 45 and Single is the kind of . program that will inspire you to yell at your television set in frustration.

As the title infers, the show revolves around former child star Scott Baio and the fact that he is middle-aged and still unmarried. It is pretty clear from the get-go that he is a commitment-phobe who has spent much of his adult years in and out of mostly vacuous relationships with women he has no intentions of settling down with.

His “babe list” consists of the kind of females regular guys usually have to buy a magazine to see- Denise Richards, Pam Anderson, Heather Locklear and the like.

That, however, was in his younger days and since he is older now and no longer what one would consider to be a “bankable” celebrity anymore, he’s not exactly the same “hoochie magnet” he used to be. Like it or not, Hollywood is a status-conscious town and, if you are no longer in an influential position, career-wise, the kind of ladies Baio seems geared towards, are looking elsewhere.

Loneliness- so he claims- and his mother’s desire for him to be married and supply her with grandkids- are his apparent motivations for doing this reality show. I am somewhat of a skeptic, though, when it comes to any reality show being sincere about anything. The real reason for him doing this program, I suspect, is to attempt to resurrect his career.

Baio is contronted, in episodes, by former love interests, like Erin Moran, who try to give him clues as to why he is still single. He is also supplied with a life coach who suggests he be celibate for a designated period of time and try to determine just why he has problems finding more durable associations.

In a way, you have to feel sorry for him, because he, after all, has been in a profession that celebrates the kind of lifestyle that has kept him from establishing any real lasting relationship with a woman. The he seems to have held fast to is to find ’em, bag ’em and dump ’em.

His sophomoric friends don’t help either, as they are not particularly emotionally mature themselves. Baio is a likable guy and you hate thinking of him, years from now, being some old guy with nobody around who really cares for him.

On the other hand, there are just some people who are not marriage material. Getting married just because your parents prod you into it is not the best thing. If Scott Baio isn’t ready to take the plunge yet, it’s best that he does stay single, rather than wedding a woman and then cheating on her or being emotionally absent from her. At least he is honest about his fears and feelings, which I grudgingly give him his props for.

I seriously doubt that participating in Scott Baio is 45 and Single will alter Baio’s outlook on relationships, but I suppose the romantic in me still hopes otherwise.